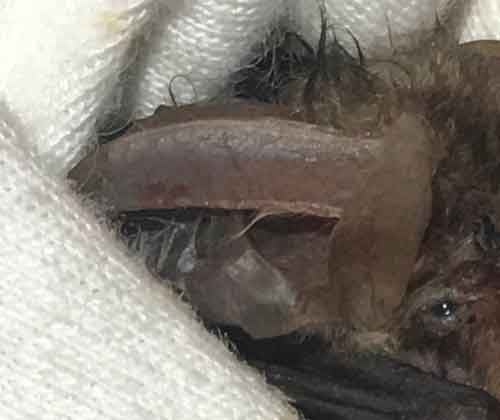 At work, and another

rescue on its way.

I now have male BLE. He’s been outside on the ground for the past 28hrs and is not in good shape. I think it was a close call as he looks rough and is totally unresponsive. For sure he wouldn’t have survived another night out there.Am trying to get rejuvenating fluid into him. His mouth is slightly open and his lips have been moistened, but he’s not responding; it’s as if he can’t move his jaw.

Update: Further attempts to give him rejuvenating fluid twixt sitting in his pen in the warmth. During the last attempt, after about 5 mins he started to very slowly move his bottom jaw up and down awkwardly like a broken clockwork toy. So sad to see. I managed to get him to accept a tiny amount of fluid, but am not sure he is going to make it.

I’ve just had a quick bite to eat and am off to see if we can do it again. I’ve named him ‘Furzy’, after the area in which he was found. Fingers crossed for him. Added to this, little Berry my most recent Pip accepted and ate grown-up food tonight so am hoping she is now going to self-feed… yay!   A busy and hopefully successful evening.