Not for the squeamish 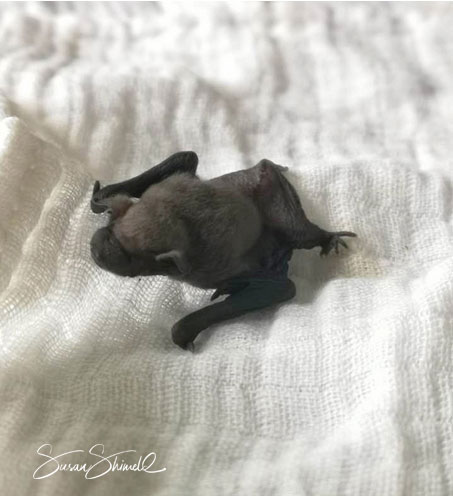 Over the years, many injured bats have come through my door, and sadly many of the injuries are caused by cats.

Injuries caused by cats can include fractured forearms, torn wing membranes, exposed bones, broken fingers, shoulders, hip joints, and many cat-attacked bats will often never be able to fly again and have to be pts.

For this reason, if you can, please keep your cat as an indoor pet. If this is genuinely unattainable, then at least bring your cat in an hour before sunset and release an hour after sunset. Doing so gives our furry flying friends a chance to drink and feed; before returning to their roost to feed their young or to rest, before your cat emerges again.

One recently injured bat I received was a mangled Natterer’s bat. She had been cat-attacked and left on the ground, unable to ever fly again. The homeowner had seen the bat walking across his lawn and into a flower bed. He didn’t realise she had been attacked and thought that bats probably crawl across the ground.  Days later, he saw her again on his gravel driveway. At this point, he realised there was possibly something wrong and called me. Sadly the female bat had a broken shoulder, fur missing from her chest, she also had flystrike; fly eggs in all her wounds, indicating she’d been grounded for some time. She was also lactating, which means that somewhere her pup (her baby, similar to the pup photo above) had been waiting for days for her to return to feed him. I felt so sorry for this poor mummy bat. Such a waste of two precious lives.

Many bat pups are often left orphaned because cats have killed their mums, or some other fate has left the mothers grounded and unable to return to feed and care for their young. All bat carers are inundated each year with orphaned pups and injured cat-attacked bats.

The photo above is one of my orphaned and rescued bat pups.  One of the luckier ones, though it is not an ideal situation and pups are far better off with their mum raising them.