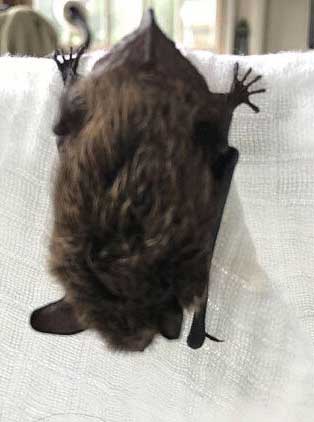 Received a call from the vet re: a bat found during early evening, in the middle of the road on a housing estate in Blandford Forum.  Thankfully a kind soul had collected and delivered the bat to the local surgery.

Having just returned home after moving more furniture from the studio, it was a case of ‘turn-around and back out the door’ to collect this little rescue, thought to be a Pipistrelle.  As it turned out, it was a Whiskered bat and am pleased to say other than a few small cat puncture holes in her right wing, she was not injured, she was active and very vocal. As an uninjured bat or bird can deteriorate and die within 24hrs of being bitten by a cat, it is imperative that antibiotics are administered immediately.  I gave her antibiotics and over the next few days she rested, ate and drank well.  Sadly cat saliva carries numerous bacteria which will slowly kill birds, mice and bats if left unattended.

When test flying rescues for the first time, I test them in my mesh tent as it is a soft landing for those that may not be quite strong enough or capable.  So I was pleased to see that after four days recuperation that she didn’t have any problems, and I duly booked her in to fly in a proper bat flight owned by East Dorset Bat Rescue. It is always important to check that a bat seemingly ready to be released, can sustain flight and manoeuvre well.

For the past few months we have had lots of bats, practice flying each night in our bat gym here at home, and as they were progressing well, we toodled deep into Dorset countryside to test fly my Whiskered along with a few of my other rescues.  It was a successful evening, and I knew immediately she was ready to be released back to the wild.

Normally on arriving home I transfer the bats to their respective flexariums in order for them to eat and sleep.  My Whiskered had other ideas though.  Taking advantage of my slightly sleepy state she wriggled free, and Brian’s face was a picture as he entered the cottage to find me watching a bat doing numerous circuits around our Dining Room.   It turned into a bit of a longer evening than expected – but am pleased to say I eventually managed to catch her. Two nights later, the weather conditions were good and my pesky Whiskered was finally released close to playing fields, woodland and  hedgerows, and not far from where she was originally found.