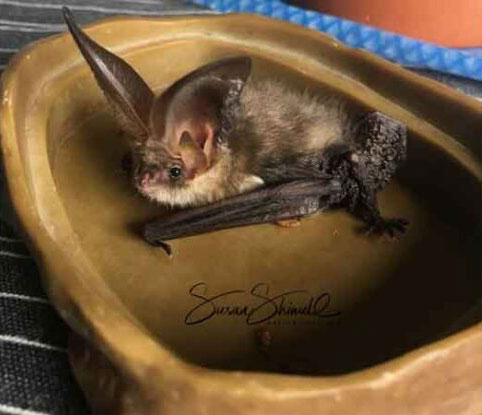 My first injured brown long-eared bat of the year was Bucksy; he arrived in May. He became a well-known little bat and did a great PR job as his story and photo were published in our local Tollard Tattler magazine.

Sadly, I have been unable to help some of the bats received as their injuries have been beyond repair.  I am pleased to say though, that many of my bats have also been successfully cared for and released.

The attached photo and video are of Massi, another brown long-eared bat that came to stay with me in August.

Massi was extremely underweight and had been spotted sitting on a wall for over 24hrs during freezing weather.  Had he not been rescued that night, I doubt he would have survived another 24 hours. A big thankyou to Massi, his finder, for bringing him to me.

From Massi bat’s arrival, it was apparent that he was in a poor state; he was half the weight he should have been and was unresponsive.  When he finally started to accept a warm drink, I fed him a little and often, first rejuvenating fluids, then bat milk, and eventually solids, slowly building him up, and slowly but surely he gained weight and strength.  He was a dear little soul.

A couple of months ago, I invested in a Puppy Playpen; the pen is a small area where my bats can practice flying without harming themselves.  It was ideal for Massi as he needed to relearn how to use his wings.

It was a delight to see him flying for the first time since his arrival, albeit flying a little awkwardly.  Massi gained more and more strength with each flight practice and was soon flying expertly in our bat flight. Massi is now flying free!