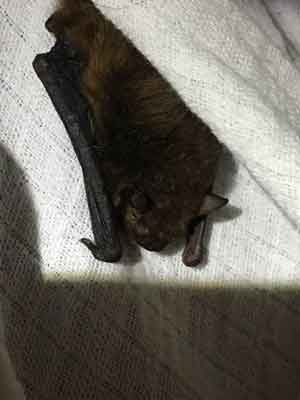 I was hoping the weather would warm up enough for me to release my winter bat rescues, but the past weeks and nights have been 2-4C, and far too cold for bat release. In anticipation of the warmer temperatures; a couple of nights ago I started test flying my rescues in the safety of our bat gym.

Tonight I was in for a surprise. Above is a photo of a very sleepy Berry, after giving birth.  The little bulge on the righthand side is her pup tucked up underneath her.

Berry pipistrelle was kindly rescued and delivered to me earlier in the year after being cat attacked. She was underweight and had ventured out looking for food. Thankfully, she slowly but surely recovered, and as bats hibernate in winter it was important that she gained weight and was fully recovered before being released in the spring.  This evening in the bat gym, I held Berry as before, but on this occasion, she took me by surprise and immediately attempted to fly. The poor girl grounded and it was at that point I realised she had a little pup clinging underneath her.  I’d noticed she was gaining weight and wondered if she may be pregnant or whether it was just weight gain from lack of exercise.

So I’m now a Nanna Su, batty carer.  Over the years, I’ve successfully raised orphaned pups but have never had a mum and pup to care for. It is far preferable for mums to give birth in their natural environment, but fingers crossed that my mum and pup will be okay.