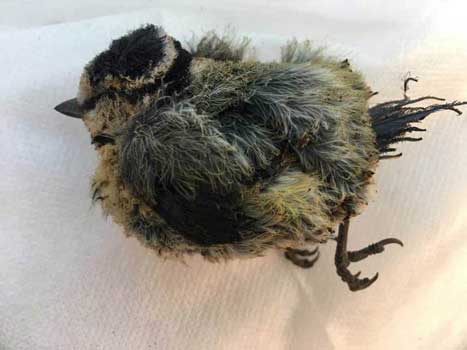 I despair. I received a call from a third party re: a blue tit stuck in an unlit wood burner. Apparently, the bird had fallen into a chimney pot, down the flue, but I was told that it hadn’t been there for any length of time, so I advised to just release it. It later transpired that the bird didn’t fly away as anticipated.

I then received a message to say the blue tit had a slightly singed wing because when the finder opened the door, he couldn’t initially see the bird – so decided the best course of action was to light a tiny bit of paper inside the wood burner as he thought the bird would then fly straight up, vertically, out of the top of the chimney pot. I couldn’t believe what I was hearing. The finder told the third party that the bird seemed fine; that it was only a small bit of paper and a slightly singed feather.  I said the bird was probably in shock and advised to place it in a safe box, with water, in a quiet place as shock can kill birds or any small mammal.

The day progressed with no news, and I wrongly presumed all was well. It later transpired the bird was still in the box and it still wouldn’t fly.

We organised a pen here at home and the chap delivered the blue tit to me. It was a young bird, a fledgling, and probably on its first-ever flight. The photos are of the little blue tit I received … it was dead on arrival and was heartbreaking to see. How anyone could think that this new, bright, baby blue tit, was in good shape and ever capable of flying again, is beyond me. The poor little thing must have suffered terribly.