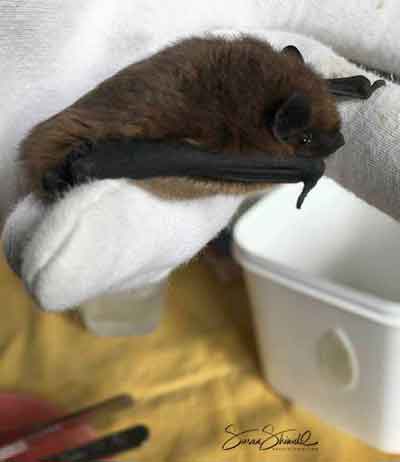 Over a week ago, ‘little Julie’, a pipistrelle bat, arrived on my doorstep in a large Christian Dior box. She’d been found on the floor in a hallway. The owner/finder has two dogs but said that they weren’t anywhere near her.

On arrival Julie looked in good condition: there were no obvious external injuries; she was only slightly underweight, but she didn’t, or couldn’t move which was of concern. I gave her electrolytes which she accepted willingly and after a few hours of intermittent drinks, introduced her to a soupy-gloopy meal, which she ate with relish.

For over 24hrs though, she still didn’t move a muscle and I wondered if the dogs may have nudged her about before she was found. How she came to be inside the house was a mystery but it transpired that trees had recently been felled and she may have been hibernating in one of them. There was a large hole inside one of the logs brought in for the fire and I think she probably had a lucky escape.

It was important to give her time to recover and I also administered pain reliever.  After 24hrs, I was pleased to see her other bodily functions seemed to be working okay.. and then one p.m after her dinner, I placed her in her pen and she very slowly moved toward her heatmat. Yes!!

A few nights later, she had a successful test flight in the soft, padded puppy playpen, and last night she flew like a dream in our bat gym. Over the years, I haven’t released overwinter as my bats in care have not been ready for whatever reason.  As ‘little Julie’ is now a good winter weight, and the forecast is predicting mild temps. over the next two nights before dropping again, am hoping to release her this p.m.  I know she is capable, but am already feeling slightly apprehensive for her. If the weather changes and is too cold I won’t release… but fingers crossed for her as I know she would be better off caring for herself and flying free. She is a gentle little soul and really is a sweetie.

Little Julie was released tonight and within a few seconds she had her bearings and returned to her roost.