My photo is of Joey with a little white moustache having just finished his dinner, and preparing to have a snooze.

I’ve had rescues of various species over the years. Once on the mend and feeling better it takes about 2-4 days for them to learn to self-feed. Joey, my underweight Pip, was found on a stable floor and delivered to me on December 5th. He is eating well but the rascal just doesn’t want to know about feeding himself.  It is a known fact their brain is only on tick over in the winter and they take longer to learn. As a fellow bat carer said; they also forget easily and often have to be shown again if they go into torpor.  Which also sounds like me during the winter months too.

Last night was definitely a step in the right direction. Joey kept dropping his mealworms after a few munches, but with help, he ate a few! I mentioned to him that he must remember this progress over the forthcoming nights.

Fingers crossed that he does. 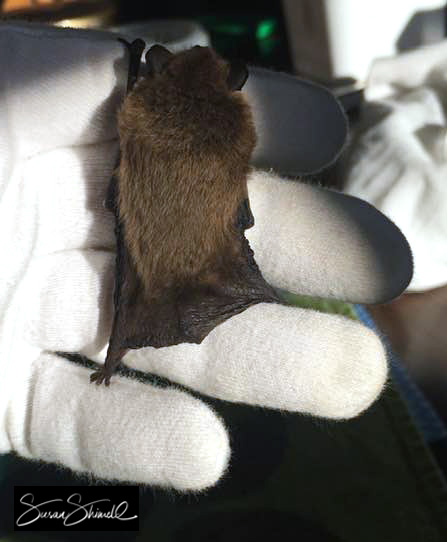 Update: Joey going walkabout. A bat’s wing is an extension of the skin of its body.  It is called a wing membrane and in this photo, Joey’s tail membrane can be clearly seen. From the ankle joint, the membrane extends between both his leg joints and incorporates the tail vertebrae in the centre.  When not extended the membrane gathers into wrinkly folds. What is a bat’s tail used for? Bats use their long or broad tail membrane as a pouch to scoop up an insect when in flight. The insect is then either eaten in flight or taken to a perch and eaten at leisure.

The recent milder weather would’ve been ideal for releasing Joey had his weight increased sufficiently. Unfortunately, it looks as if we are in for the long haul though, and our little bat is going to be joining us for Christmas dinner. He is in good condition: eating and drinking well, but is still refusing to feed himself.  At this time of year a Pip needs to be at least 5.6g to survive the long winter months and at present, he’s sticking at around 4g.  Joey is a sweet little chappie, good-natured and basically, he just wants to snooze. This is understandable because it’s what bats do at this time of year, but it doesn’t help when trying to encourage him to self-feed. Two weeks on and am still feeding him by hand but will keep you posted as to his progress.