Sadly I couldn’t save this ‘little one’. 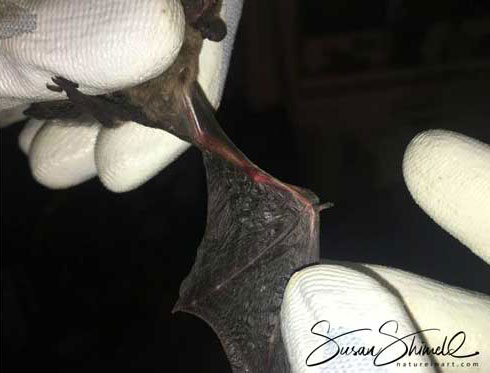 It’s early evening; another bat call and thankfully the finder is kindly bringing the bat to me.

Sadly the poor bat has been cat attacked and was found on a sitting room floor.  As often happens, a bat can appear to be fine, but if you can approach a bat and it doesn’t fly away – there is a good reason. No bat wishes to be in close proximity with people if it can possibly avoid it, and may even try to run away and hide, but any grounded bat that can be picked up needs to be seen by a carer.

On arrival, I found the Pipistrelle bat’s wing membrane was torn from the fifth finger to his hip. I initially thought that if in care, there was a strong chance the wing membrane would heal but realised it would take a long time to mend.  During the winter months, a bat’s metabolism slows and they heal very slowly. My main concern was his forearm. Breaks too can also heal with time and care, but it is not advised this late in the year – I was keen to get a second opinion.

That night, thankfully the little bat accepted antibiotics, painkillers, rejuvenating fluids, and food… with snoozes in between.  At midnight, it was time for me to sleep too, especially as I would be checking on him again during the early hours.

Update:
Checking my little bat the following morning, it was sadly apparent that his injuries would not allow him ever to fly again. The injury to his forearm was a compound fracture. Thank you to the finder for making the calls and bringing him to me, at least the little one was pain-free and had warmth, food, and comfort overnight.