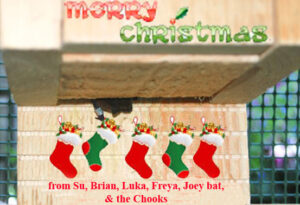 The last time I overwintered bats was in 2012.

Amidst my other 2012 rescues, I reared five orphaned pups. The pups had been found during the summer months, inside a cardboard box in the middle of a field: the box contained 50 pups plus a couple of adult females. They had been ripped out of a roof somewhere in Wiltshire and just dumped, and it was pure luck that they were found by a dog walker.

The bats were split into small groups and distributed to various carers. Sadly not all survived, but am pleased to say my little ones did make it and were healthy. The only problem was I was unable to find a bat flight in which to test fly them outside.  As with all pup rescues,  it is important to see and hear them catching insects, maneuvering, and fending for themselves before releasing them.  After many inquiries and much searching, and with the help of two fellow bat carers, we eventually found a bat flight; it was old but it would suffice, and Brian worked hard to make it safe and later on he also extended it.

Unfortunately, by this time though it was too late in the year for my pups to be released. They were all self-feeding which was great, and throughout late Autumn made good use of the flight: they were flying well, learning how to chase insects, and had also learned how to find and sleep in the bat box. Meanwhile, we’d also made a hibernation box in preparation for the winter months.  I monitored the temperature and humidity inside the hibernation box day and night and it worked brilliantly….. but when the temperature started to drop below freezing I decided not to risk it.  I transferred my pups into a covered flex inside a prepared shed; kitted out with a frost stat. etc. The above photo was part of my 2010 Christmas card design and shows one cheeky Christmas pup peeping out from the bat box.

Thank you for connecting with Nature In Fine Art. If you wish to stay up to date with news from my bat cave, studio, artwork, product updates, and more, you can do so here, or on Facebook, Instagram, and Twitter.