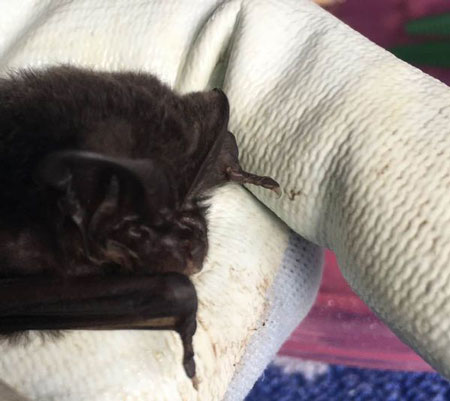 Iggy, Barbastelle, waiting for his meal this a.m.

I am now sitting in the dark, all wrapped up against the cold and damp, and counting my blessings. I am a lucky girl to have the support and help needed, to help me care for my rescued bats.

With more bats needing to be rescued each year the cost of caring for bats has also increased, and this year we’ve also had the added expense of materials to build my much-needed bat flight. The bat flight that Brian built, even though he was unwell….the bat flight in which I’m now sitting as I share my good news. Not only do I have Brian’s support; but I’ve also recently received an amazing gift to help cover the costs of caring for my bat needs: medicines, food, and equipment, and green flight carpet. I cannot thank you enough dear B.B, for your kind and generous donation.

Earlier this p.m, Bryony Pip, flew for a short while. She now eats well and her flying skills have improved considerably but I’m concerned as she is still unable to sustain flight. When she arrived in July she was so poorly and traumatised she wouldn’t move at all – and this past month she has progressed well, but sadly she tires quickly. If she grounds she can become airborne again, but more often than not just sits there, and should she do this in the wild, she wouldn’t last two minutes.

Meanwhile, Iggy, my Barb, is flying back and forth above my head. He has been flown each night and flies well, and as he’s a big bat I opened the safety porch tonight to give him the extra space in which to twist and turn: he is making full use of it and appears to be enjoying himself. Once he’s decided he’s had enough exercise for the night; I have a large net with which to catch him and I bring him in for his dinner and return him to the safety and warmth of his flex. He has gradually gained weight and is ready to be released once the weather improves. Thank you so much Brian and Batty Bridget for helping me to help Iggy Barbastelle fly strong and free, and to all donors over the years who have helped me to help my rescues. So much appreciated.

I can hear a familiar sound in the darkness: a buck is grunting in the woods behind the garden, and in the distance another buck replies. Brilliant! The cooler weather, the changing colours, and the deer rutting season…it’s almost October…I can’t believe it’s this time of year again. Where does the time go to? 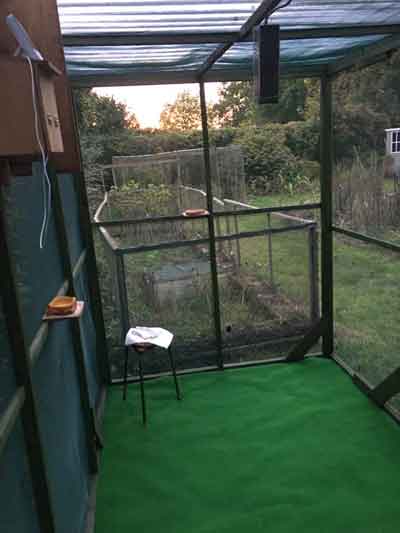