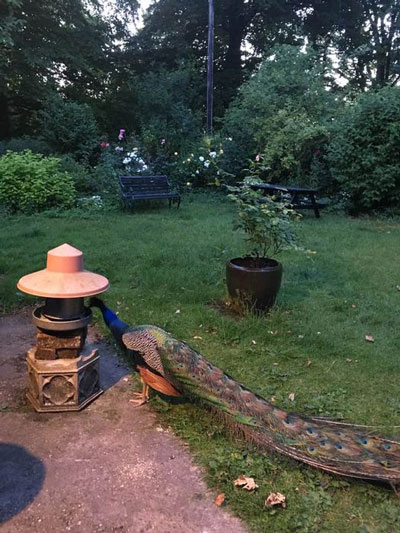 Half an hour ago, ‘twixt feeding the bats in the bat flight, and feeding my newly arrived orphaned bat pups,  I popped into the kitchen to make a cup of tea and couldn’t believe my eyes. Blue was pacing around outside the kitchen door. It was 21.30 and all birds, apart from owls, have gone to roost by this late hour.  Blue has never stayed up so late.

His wings were droopy and it was apparent that he was very tired.  He was also desperate for his food and ate eagerly.  After he’d finished eating, he then had a long drink of water before quickly heading toward his favourite roosting tree for the night.  I have a feeling that whilst exploring the surrounding countryside Blue became disorientated and lost all sense of direction. Thankfully he managed to find his way home and it is lovely to know that he is now safe and sound.

I popped outside later to see if Blue was okay and to say night night.  I think this translates as: ‘Do you mind, I’m trying to sleep’. 🙂