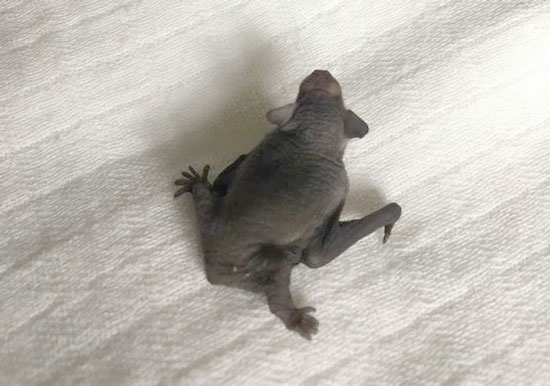 This morning, in order to make the bat flight rodent-proof, we started to staple mesh wire around the base on the outside of the flight,   A busy and nice a.m together, but all came to a grinding halt with another bat rescue call. This time for an extremely young,  orphaned, thin, bald pup.  I’ve named her Tinkerbell as she’s so tiny, and because she has also been a tinker trying to get her to feed. I’ve made numerous attempts throughout the day, and slowly but surely her weight has increased slightly. In between her feeds we managed to finish meshing the flight and my bats are now doubly secure.

In order to keep Tinkerbell with us I now have a couple of early morning feeds ahead of me, plus we have an early start on Monday a.m as Brian has to be in hospital for 07.45hrs.

Meanwhile, Blue, our rescued peacock has been missing for almost 10 days.  🙁  There has been no sign of him, and we have been hoping that perhaps he had returned to the Larmer Tree Gardens, where he was born, and where there are other peacocks.  Five to six years ago, his mother lived in the gardens but she sadly died when he was only a few days old.   He was found by the groundsmen and as they didn’t know what to do with him; we stepped in, and he came to live with us as a tiny chick.  When he was mature enough we returned him to the Larmer Tree Gardens so that he could live with the other peacocks, but after a couple of weeks we were amazed to suddenly find him standing on our doorstep. How he’d found his back to us we will never know – and he’s been with us ever since.

Over the weekend we received a message that Blue had been seen in a nearby village; we searched, but unfortunately, we couldn’t find him.  What with bats and peacocks it’s been a full-on and emotional weekend for sure.  Hopefully, Blue is okay, and a number of people are now keeping an eye open for him.  Thankfully Tinkerbell, my newly rescued pup is also doing okay: she is not so thin, so fingers crossed she will pull through.   Also, fingers crossed for my precious Brian tomorrow.