Photo of my first bat flight in the very early days. We purchased the frame from another carer, and within weeks Brian had extended it, installed a two-door entrance, and provided part roof covering. It was an ongoing project and worked a treat. Sadly I don’t have any photos of the finished flight.

On the first night, when they were old enough, I let my baby bats out of the box into their Bat Flight for the first time. They flew around, landed on the mesh walls: and all seemed well, but I couldn’t settle until I knew they had learned how to access the bat box.  At 1 a.m, I found them all outside. They were cold and tucked up in the corners of the flight, or hiding behind the bat box – rather than in it. I popped them back into the box and hoped they wouldn’t venture out again that night.

Monday night, the same: it was apparent they needed guidance to the bat box entrance, and after giving it some thought, I pinned a nappy liner below. My nappy-liner landing pad did the trick. Once on it, they immediately started to crawl upwards, and inside they went! The landing pad stayed in situ throughout; they had learned where to find warmth and protection from the elements. 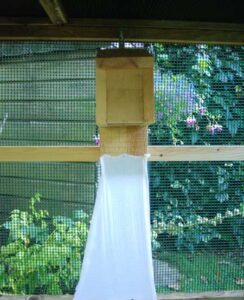 Inside the flight, I had a couple of bat boxes, a blue-black night bulb that I switched on each night to attract insects—having an electrician hubby is really useful. I also had a covered compost bin which I topped up each day to encourage fruit flies which would then emerge into the cage during the night. I placed a water tray with pebbles in it so that the bats could land and drink. I put two to three small shelves with dishes containing mealworms at different heights. I would count how many I placed in each and in the a.m how many had been eaten. Large pots containing flowering plants and long grasses were placed close to the pen to attract insects. The roof and sides were partially covered with perspex to protect the bat box from rain and stop the mealworms from drowning in the dishes should it rain overnight.  I soon learned that I also needed two doors to get in and out, to stop bats escaping as I entered and left.

I would check the bats each night with a detector, listening for feeding buzzes, and also check each a.m to make sure they were tucked up in the bat box and not exposed during the day. We also redesigned the interior of one of our bat boxes to include a small food and water dish. The bats would often eat from this if the weather was rough. It was also designed with a mind to help them when they were finally soft released. I wanted them to know they could find food in the box, as well as in the flight.