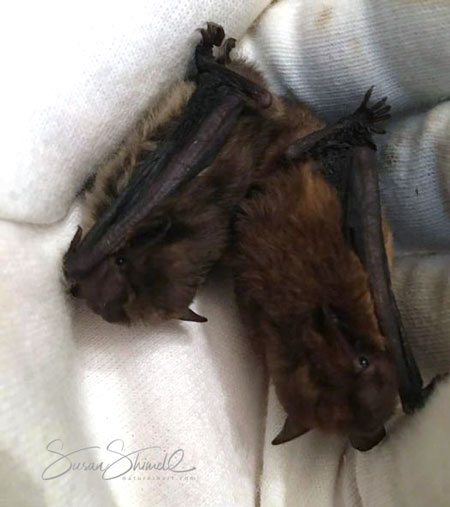 A handful of Pips: Berry and Little Jonesy, after an evening together in the puppy playpen.

Bats mate during September – October and then hibernate throughout the cold winter months. In spring, the females will feed up in preparation for giving birth and will eventually congregate in suitable and warm maternity roosts.  They give birth during June/July.  Bats’ have just one pup each year, and on rare occasions may give birth to twins.  They are excellent mums and will suckle their pup for 6-7 weeks.  After 3-4 weeks the pup will start to stretch and flap his wings in preparation for learning to fly.  A pup thrives on its mother’s milk, but once it can fly it will also follow its mum when she leaves the maternity roost to feed. At this stage, he is still suckling but is also learning how to manoeuvre and hunt for insects. Seven to eight weeks after birth the pup is almost independent.

As Berry was a winter rescue and in captivity, I had to wait until the weather was warm enough to safely release her. As the cold weather continued, it was not possible, and Berry surprised me by giving birth early.