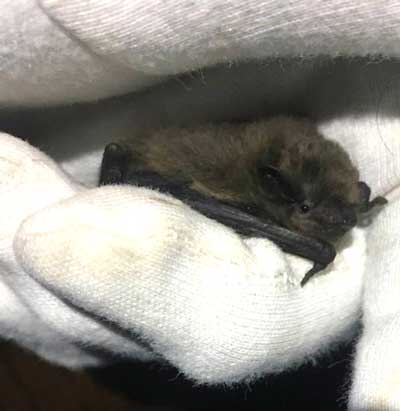 Little Jonesy at 27 days old, having a look around after being weighed and measured. He is in good condition and though he cannot fly as yet, he will soon start to stretch his wings and be more adventurous.  At present, he is still relying on mum for his milk feeds. Today he weighs 4g and his F.A. measurement is 27.96 mm.

In the first video Little Jonesy is showing off his pearly whites… apart from showing off his tiny white, little teeth; he is echolocating: emitting calls in order to understand his surroundings.  Bats find their way around, and also hunt and forage for insect food using echolocation.   Echolocation calls can be emitted orally or nasally depending on bat species/family.  Bats emit different sounds and then listen to the sounds as they are bounced back. This way they can gauge the distance and direction of their insect prey. Bats are not aggressive, although like any wild animal, if frightened they may bite to defend themselves.

Video: Little Jonesy is very calm and taking it all in his stride