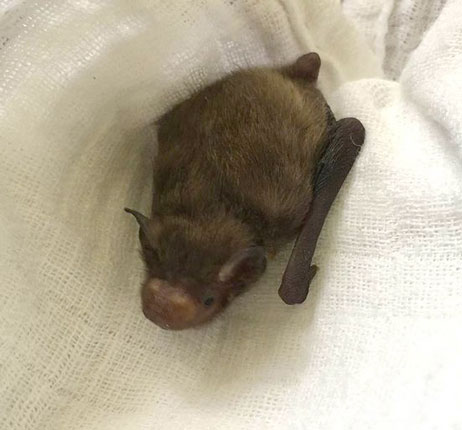 Another little one has arrived. Found wandering, not in Glasto, but during Glastonbury festival weekend… so have named her, Little Amal.  She has a bright pink nose and three days on she is now looking much better.

Little Amal was struggling initially, and just as with Barnaby, she was underweight and refusing to drink. I continued to attempt to feed a little and often…. and by the end of the day she’d accepted .08g of rejuvenating fluid. By midnight, her weight had finally started to increase.

Apparently, a few days before, an adult bat had been seen upstairs in the finder’s house; this was probably mum looking for her pup.  I believe Little Amal had been wandering about on her own for quite a while.  As it was late in the day when she was found the finder attempted a reunite before contacting me, but mum bat didn’t appear. Reunites can be successful, but you need to know where the roost is.