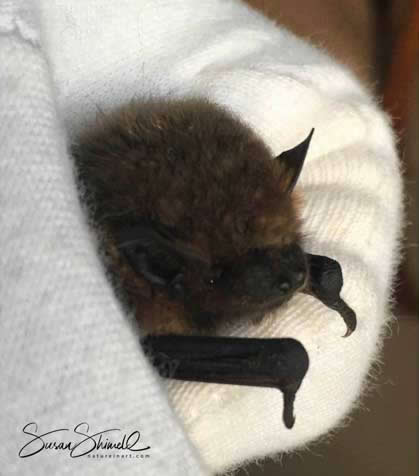 In 2011/12 I overwintered five pups that unfortunately were not ready to be released in time for winter. They were subsequently soft released in the spring. Prior to these pups, and since, I’ve never had a bat rescue call during winter, until this Saturday.

I had a feeling I was going to receive a call, and this is Joey, a Pipistrelle bat, and our new lodger. Little Joey was minding his own business and hibernating in a horse rug hanging in a stable. The rug was removed from the wall and apparently Joey squeaked as he fell to the floor.  I think the fact that he squeaked saved him from being stood on by the horse.  He was quickly scooped up into an empty feed bucket and this is how he arrived on our doorstep.  Joey is underweight for this time of year so it is probably a blessing that he was found. Since arriving he’s had a couple of rejuvenating drinks, a little food, and is now tucked up in a warm faunarium.