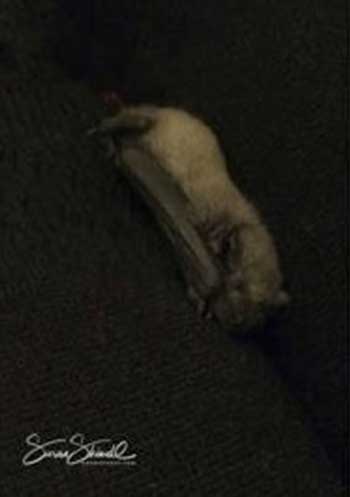 Headed for the garden studio to do some artwork and received a call re: a cat that attacked a bat last night. Spent the remainder of day on the road collecting the bat and then administering medication, anti bio’s etc. She is a female Soprano Pip. and when I found her she was exceedingly cold and stiff.  Hopefully she will make it and still be with us in the a.m. The photo was taken in darkness, with my mobile, so as not to disturb my snoozing rescued Pipistrelle.

If you enjoy relaxing in your garden in the evening do watch out for bats!  Identifying the various species can be tricky, but certain bats emerge at different times throughout the evening and each species has individual and characteristic flight paths. For example, Pipistrelles are the first bats to appear just before the sun goes down and they have a characteristic erratic flight as they zip around catching the little gnats and midges. One pipistrelle can catch up to 3,000 gnats in one night.  Without bats our lives would be midge-ridden and miserable.

Update: Am pleased to say this little bat recovered well and was released back to the wild.