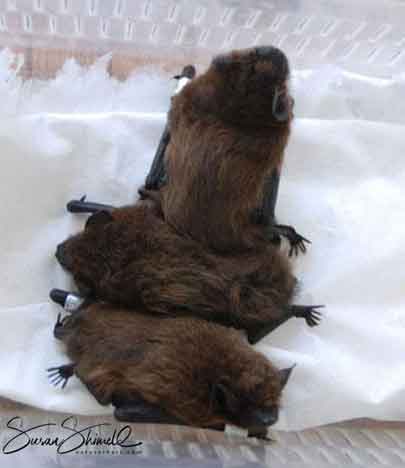 Couldn’t believe someone would do such a thing.

In June 2011, nine years ago, 50+ baby bats, plus a couple of mum bats were found by a dog walker, in a cardboard box in the middle of a field.The bats had obviously been ripped from the safety of their maternity roost in a roof, and god knows how many other bats perished in the process. We presume the roofers were working illegally (meaning the building hadn’t been surveyed), as they most certainly wouldn’t have been given permission to reroof especially at this time of year.

Bizarrely though, someone had gone to the trouble of placing the Pipistrelle pups in the box with a few blades of grass and a pine cone. To go to that trouble and then leave them to their fate in the middle of an empty field, didn’t make sense, and it was just sheer luck that the dog walker happened to be in the vicinity, and that the dog had shown interest in the box. The pups would have most certainly perished in the rain overnight, or in the heat of the following day had they not been found. Sadly, as it was, both the mothers had serious injuries and died.  Apparently some of the pups didn’t make it either, but thankfully many of the pups did, and were released back to the wild once fully-grown.

This is a photo of some of my lovely pups rescued from the box.  When this photo was taken they had been with me for a number of weeks and were waiting patiently to be weighed.  One little Pip appears to be sitting comfortably, whilst taking in the view and wondering what the hold-up is.