My artwork, ‘Aerial Wolf Hunting’, is a pencil portrait. My artwork depicts a wolf being shot at by a bounty hunter, from a helicopter. During the winter months, a wolf can be seen clearly against the pristine, white, snow-covered ground. In my artwork, the wolf realises he is in danger but is unable to escape.   The helicopter will chase the wolf until it is totally exhausted.

Sadly many wolves are hunted for sport by aerial hunters. Wolves often die in agony as rifle shots often disable rather than kill outright. This inhumane sport is legal in Alaska.  Every year, wolves are killed in there 1000’s by hunters who believe ‘the only good wolf is a dead wolf’. Due to indiscriminate killing, wolf numbers are declining rapidly around the world.

My wolf drawing was produced for the book, ‘A New Era for Wolves and People’ by Dr. Marco Musiani. 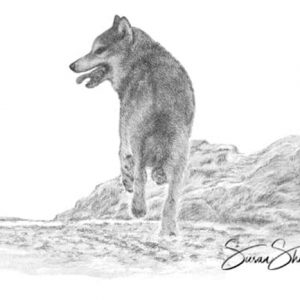