I was invited to portray an African endangered species, for the ‘Explorers Against Extinction’ auction, to be held at the Royal Geographical Society, October 2017. All funds raised: to help protect rhinos, elephants, lions and combat wildlife crime in Africa.

I knew immediately which species I wished to portray and couldn’t wait to get started on my new artwork.  I’ve been supporting a number of wildlife groups for 40+ years; Rhinos Without Borders being one of them. Months later my artwork ‘Out of the Shadows – White Rhino’, was duly delivered to the Explorers Against Extinction venue.

The grand sum of £250 was raised by my artwork and has been donated to combat wildlife crime in Africa. My artwork, ‘Out of the Shadows’ is now on display at Larmer Tree Studio.

With the sale of each ‘Out of the Shadows’ fine art print, I donate a portion: 10% of the retail cost, to combating wildlife crime in Africa. Funds raised support specialist anti-poaching dogs: Frontline Canines; all deployed to important rhino breeding areas in Zimbabwe, Botswana and Kenya and all trained by UK ‘Animals saving Animals’. If you can help, please support Rhino Conservation and help our remaining rhinos.  https://rhinoconservationbotswana.com/ 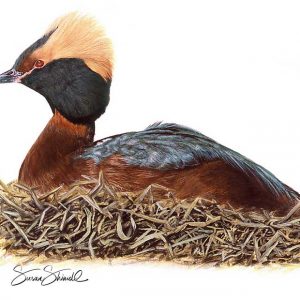