Wherever I have travelled I’ve never been far from four-legged or feathered friends. From an early age, I would rescue and care for stray, sick, or injured wildlife: animals, birds, and reptiles. The study of wildlife behaviour and caring for animals in order for them to be reintroduced back into the wild, has given me much pleasure. My wish is that in some small way I have been able to reciprocate.

In 1974, at the age of nineteen, I noticed a small advertisement in a Nature magazine. The advertisement contained information regarding the whaling industry and was warning that through excessive hunting, certain species of whales were on the verge of extinction. Horrified with the senseless and brutal manner in which these intelligent gentle giants of the oceans were being killed, I contacted the newly formed group called ‘Greenpeace’ and so began my journey into conservation.

In 1977, Friends of the Earth opened an office in Dorset. Having studied Secretarial and Business Studies at college, I offered my services and worked for the group on a voluntary basis, spending much of my free time with them. I became Wildlife Coordinator and my duties included: research, writing articles for the press and local magazines, and helping to organise meetings, events, and rallies. Becoming increasingly concerned about the environment and animal welfare, I learned a great deal as I typed letters and reports covering a wide variety of subjects including factory farming, intensive agricultural practices, recycling, nuclear power, and climate change.

Shortly after reading ‘The Last Great Wild Beast’ Show, written by Bill Jordan, an RSPCA Chief Wildlife Officer, and Veterinary Surgeon, I also became actively involved in the protest against the use of ‘wildlife in entertainment’ and ‘traditional’ zoos.  With many like-minded people, I still believe that such places provide little or no educational value, displaying only examples of extreme stress and suffering. Totally dedicated to the welfare and preservation of all forms of wildlife – I continue to work for and support many wildlife conservation and environmental groups.

Katie and Su – Cottage in Dorset

In 1980, I was delighted when my wish to move to the countryside with my daughter Katie, became a reality. Together we spent many blissful hours walking through woods and across meadows.   On many occasions I also found myself in the company of various forms of wildlife including deer, hares, birds, and voles – sometimes these precious encounters have been at such close quarters that I’ve hardly dared to breathe.

On one particular occasion, whilst sitting in the woods, I saw a stoat moving her family from one den to another. The stoat, so preoccupied with her duties, failed to notice my presence and continued to carry each kitten too and fro in front of me. On another occasion, as I sat at the foot of a huge old beech tree, a group of 4-5 fallow deer wandered into the clearing yards in front of me and after noting my presence, to my amazement, continued grazing. Precious Moments, I will always treasure.

In 2003, I invested in my own Fine Art Printer and soon after, learned that Birute Galdikas, founder of the Orangutan Foundation, and a lady whom I have greatly admired and supported for many years; was giving a lecture at the London Zoological Society. I duly booked tickets for the event and was delighted to receive a call from the Orangutan Foundation requesting permission to use my ‘Baby Orang’ drawing for the invitations.  Thinking that life could not get any better; I was then invited by the Orangutan Foundation to display my artwork, new fine art prints, and greetings cards at the Zoological Society seminar.  The evening was a very special event and, to top it off I met Birute and was able to give her a fine art print of her ‘Baby Orangutan’ artwork.

My love of wildlife extends to all creatures ‘great and small’ and in 1996 I became a member of the Dorset Bat Group. Since then I’ve conducted bat surveys and counts for the Bat Conservation Trust, Dorset Wildlife Trust, and the Vincent Wildlife Trust. Having been interested in bat welfare for so many years, I eventually became a Registered Bat Rescuer & Carer in 2003.   Bats are enigmatic and valuable little critters: they help farmers and gardeners by eating the insect pests that would devour and ruin crops and flowers. They are also our only flying mammals and sadly, humans are responsible for the destruction of their food source and much of their natural environment. If you wish to help the conservation of bats and enjoy seeing bats flying free in the wild, please consider supporting my bat rescues. All donations go to helping our bats!

In 2002, my fiance Brian and I were married on safari, in South Africa. In KwaZulu-Natal, we saw Leatherback turtles, and in Hermanus, I finally saw my very first whale. After 29 years of campaigning and promoting the conservation of whales; to actually see Southern right whales breaching, spy-hopping, and lob-tailing in their natural habitat, close to the shore – was an experience I will never forget.

In 2005, I converted my Larmer Tree home into my ‘Larmer Tree Studio’. I opened my Studio doors to folk visiting the gardens and it was lovely to meet so many different people from all walks of life, and from all corners of the world. During the following years, my business expanded: with work consisting of commissions, portraying wildlife, running my gallery, and website, printing my artwork, and unbeknownst to me: also becoming well-known further afield. Having always dreamed of illustrating a natural history book, I was delighted when in 2006 I was invited to illustrate a book on Wolf Conservation written by Dr. Marco Musiani, a Professor at Calgary University, Canada. For the following 19 months, I worked closely with the author and Denise Taylor from the UK Wolf Conservation Trust. To be given the opportunity to sketch, draw and be with wolves at such close quarters; whilst also working to help keep wolves in the wild; was a super and unforgettable experience.

Two books containing my artwork: ‘A New Era for Wolves and People’ and The ‘World of Wolves’, were published in October 2009 and 2010 and launched at the UK Wolf Conservation Trust in Reading.

In November 2008, the Editor of the ‘Artists and Illustrators’ magazine also contacted me inviting me to describe my journey into the world of printing.  My article on the production of my Fine Art Prints and Greetings Cards was published in December 2008.  A week after submitting my article, I was then invited to write a feature about my life as a ‘Pet Portrait Artist’, which was subsequently published in the ‘Artists and Illustrators’ – March 2009.

Everything slowly came to a grinding halt as sadly, both my parents became seriously ill and in need of full-time care. Commissions were cancelled, artwork put on hold and my Larmer Tree Studio door was closed.

During this period I learned that the BBC was holding its first-ever ‘Wildlife Artist of the Year’ competition, and on the off-chance, I entered a couple of artworks. To be selected as a Finalist with my pastel artwork ‘Wolf Portrait’, was an absolute joy. Around this time, I was also delighted to be accepted as a Signature Member of the ‘Artists for Conservation’ Society; a leading artist group supporting the environment, and protecting species, and wild places.  Amidst my parent’s continuing medical problems/operations, these ‘arty moments’ were like a breath of fresh air.

2017: I was invited to paint two endangered bird species artworks to be donated to the ‘Artists for Conservation’ Society.  The paintings to be auctioned to raise money for the protection of the 600+ endangered bird species of the world. Having not painted for so long, it was a bit daunting, but a great way to get back into my artwork.  Both artworks are now part of a huge bird mural being exhibited across the US. My next artwork was another donation: a Rhino, to be auctioned at the Royal Geographical Society in London: to raise money to help protect endangered African wildlife. It was super to be supporting such an important cause, and we had a brilliant day at the RGS.

During early Spring, I entered the Dorset Art Prize Competition organised by Bournemouth University. To my amazement, in October, I learned that I’d won First Prize… £1,000….. I couldn’t believe it!  A lovely surprise and the prize money went a long way to helping forward my Art and Conservation work. My Larmer Tree Studio was once again busy with new artwork, a new website, and ideas that had been on hold for the past few years.

2020 was full of changes for everyone, and it was an especially busy time for Nature In Fine Art.  It was also the end of an era. Sadly, Brian, my husband, became seriously ill and it was time for a change. The pandemic also brought everything to a standstill and the estate decided it was time to renovate the Larmer Tree Lodge. The lovely old building hadn’t been protected or cared for over the years and there were many issues that needed to be addressed. The Larmer Tree Flat had been my home for 31 years and from my very first winter there I discovered that my home and studio leaked whenever it rained. Due to personal circumstances, and as there were now several major repairs needed to stop the building from deteriorating further, it was time for me to move on.

Brian and I worked like beavers and within a few months my Larmer Studio was based at Pier Gate Cottage in the beautiful surroundings of Rushmore Park, within Cranborne Chase. Blue, our rescued peacock parades around the parkland, and the cheeky macaws fly across and visit regularly as my new studio is just a short distance from the Larmer Tree grounds.

My vision for the future includes having lots more arty fun and welcoming visitors to my new Larmer Studio.  I will keep you updated with events, news, and photos via my Journal.  In the meantime, take care, look forward to seeing you soon, and thank you for all your support.

Su and White Rhino painting at the Royal Geographical Society 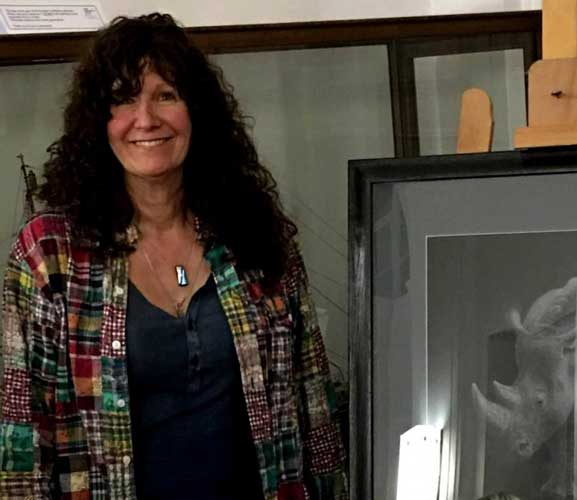 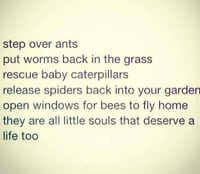 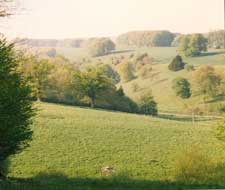 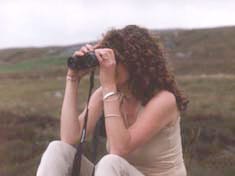 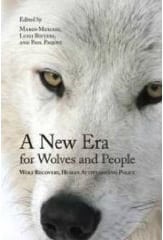 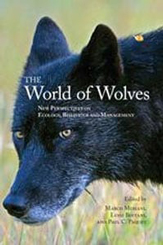 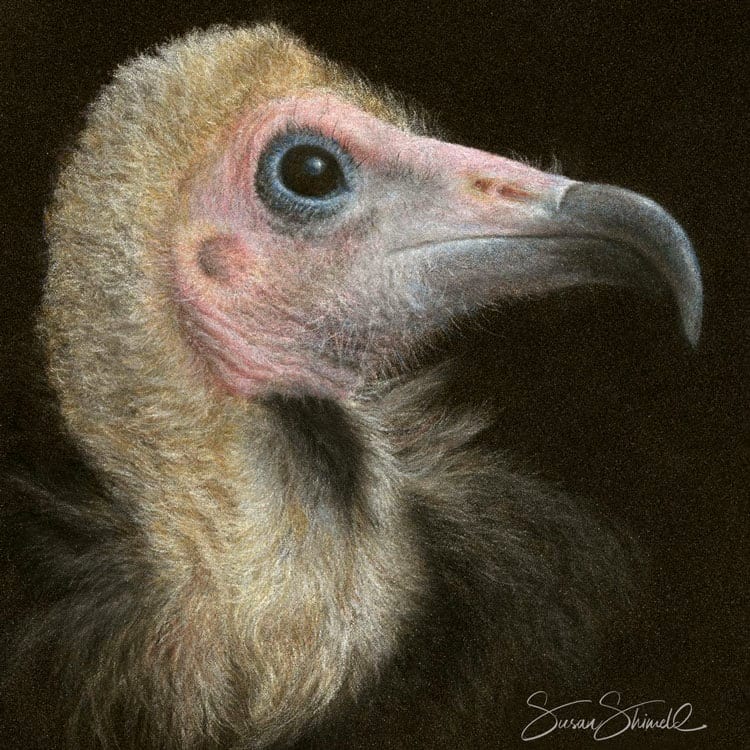 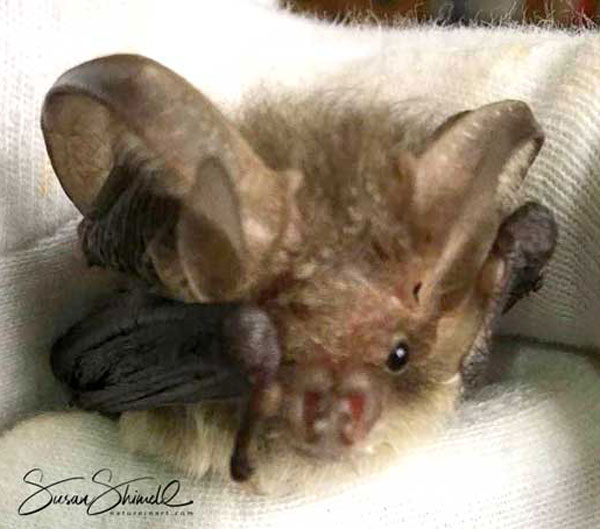 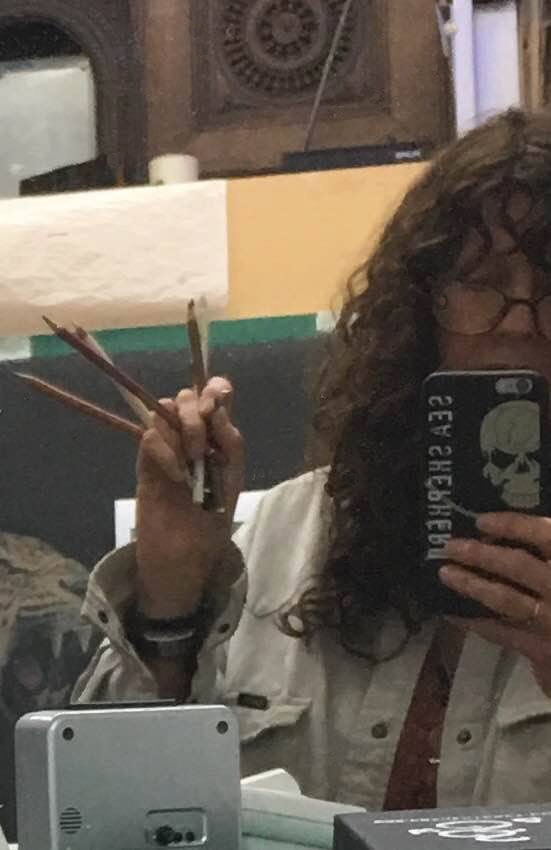