Bryony is low – but flying 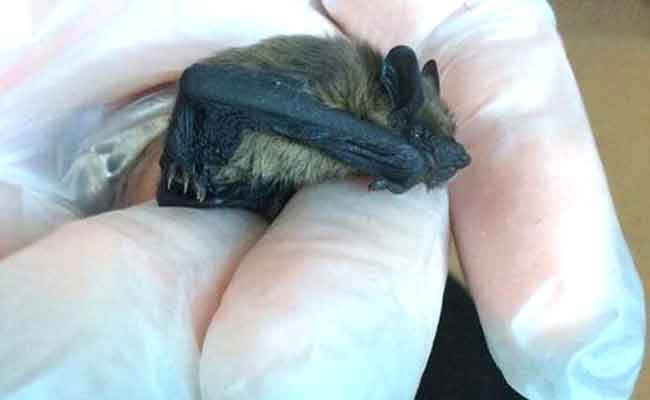 This is how Bryony looked when she arrived. She was crawling with mites, and from day one, she has been unresponsive, slow to eat, drink and move. And now, 7 weeks on, she can suddenly fly!!!

This may be boring/long-winded, but am chuffed to bits with this little girl.

Since arriving at the beginning of July, this little one, Bryony, has been hunched up; whether I’ve been feeding her, weighing her, and every time I’ve tried to exercise her, even as she slowly grew stronger.  Up until 20 days ago, I would try to get her to move in the puppy playpen – she’d open both wings then just drop the few inches to the floor.

I eventually decided it might help if she was in the flight: space, fresh air, listening to wild bats flying above; so sat on the floor in the flight with her night after night, (hence the orange counterpane to make it softer for her, and kinder on my ol’ bones), but all she could achieve were frog hops and then she’d freeze. If I picked her up and held her she didn’t move. If I placed her on the floor, she wouldn’t move, and I was beginning to think that she probably had an internal injury. I didn’t want to give up on her tho’, so I’ve continued gently, and it’s been slow progress as I didn’t want to force her to do anything. Then 14 days ago, for whatever reason, she couldn’t open her right wing. I had no idea what the problem was…but I didn’t fly her for a few days just to let it rest.

Ten days ago, we both sat on the floor again in the flight, and again she did lots of frog hops but this time landed on the mesh wall 6 inches off the ground.

She had just used her right wing, I couldn’t believe it…. but again, she froze, all hunched up, so we immediately came back in for warmth, food, and rest. We tried again the next night, and more progress… she flew and landed 2ft off the ground and then even climbed up the mesh! All good exercise, but I didn’t dare get too excited.

The following night she tried to fly again but sadly this time crash landed and we were back to no movement whatsoever – she just froze. I wondered if I’d pushed her too far. Then the weather was bad so she wasn’t flown for a few more days. Three nights ago, we tried again, and she flew low from one side of the flight to the other. No crash landing, I was so relieved.

Tonight she flew back and forth – she was flying low, but she was flying without stopping…. and briefly flew high landing on the mesh wall above my head.  Yay!!

We still have a long way to go but I’m absolutely delighted.